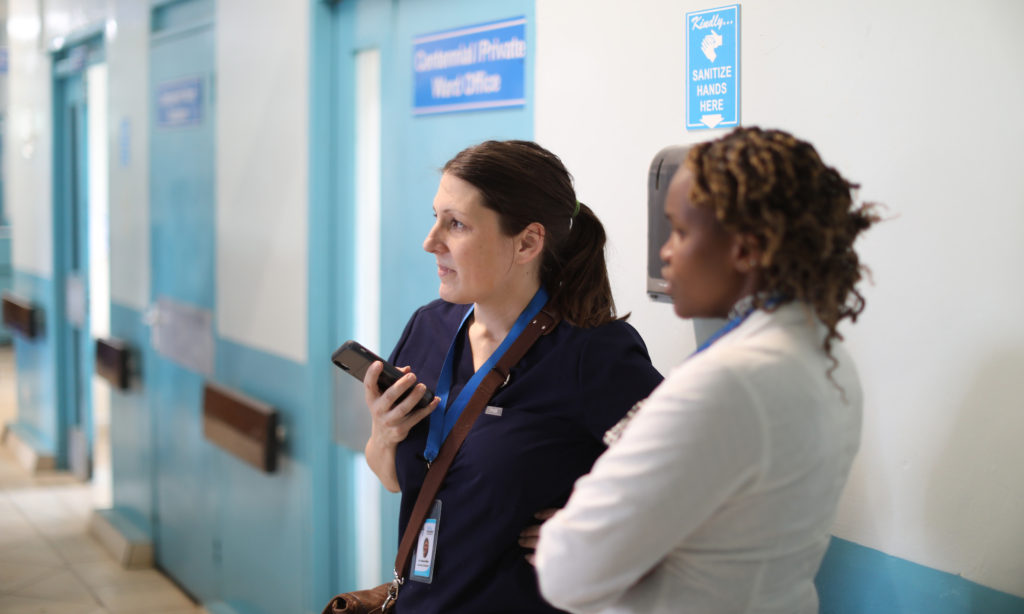 So how do you move an entire children’s ward in 72 hours? Once the administration realized that Bethany Kid’s Children’s Centre was the ideal layout for a COVID isolation ward, they worked with our partners to get permission to convert the space to prepare for what seems to be inevitable globally.

While New York asks for 30,000 ventilators, we have 334 known in the entire country. While hospitals in America beg people to make N95s and full PPE available, we know supply will not keep up with demand. 100’s of people (including my girls) are sewing and gluing and making the best personal protective gear available in-country.

I told someone yesterday, when faced with a seemingly impossible or uncomfortable task right now, the answer doesn’t get to be “no.” The answer is, “hmm. . .that’s hard. . .let’s figure out how to do make it happen.”

So last Thursday, when the CEO announced we were moving, that is exactly what we did.

First, I told the committee we could do it by Monday – then I actually walked into the space, and got a little nervous. There were termite wings on the floor and broken furniture was scattered every where. Cabinets for the adults that had occupied the space the last 5 years were at the exact height where a child could hit his head and need stitches. Windows were missing, shelves had been taken down.

I gave my initial list to our operational team and they seemed unfazed by my concern – they had been handed these tasks before and made them happen.

Sunday, at 2pm, I walked in to the ward, and cabinets were down and the window was replaced, but nothing else had moved. We were supposed to move on Monday, and we couldn’t move if we didn’t feel we could take the same excellent care of children we took in our other beautiful space.

So I called Isaac and Faith, and we made a list of everything that needed to be done 20 hours later. I ran home and made bed numbers on my Cricut machine, and we started moving beds, clearing clutter, and making diagrams of what was needed in each room.

We had a quiet night, so Nixon and I put up whiteboard tape and numbers, while our patient assistants rearranged beds and placed linens one by one.

That night, a suspected adult patient  (that ended up having a negative test) was admitted to the children’s ward. We moved 15 of our admitted patients to the other side of the building to make that happen.  Moving went from theoretically tomorrow to absolutely necessary immediately.

We all slept at 1am.

The next morning the carpenters mounted shelves and the biomedical team attached the monitors.  Our patient assistants carried exam couches to our new treatment room, and other people rolled in oxygen tanks. The clinical team reassigned patient beds and the nursing team reworked our nursing ratios. We moved furniture around, moved linens from one side of the hospital to the other and made the rest of the beds. Our IT committee created new virtual beds in our system and attached keyboards back to the computers. I begged the people working on redesigning our new business office to stop grinding concrete to clear the dust from the air for the move and they taped up cardboard and plastic.

At 12:15, I finished rounds in nursery and ran to check if we were close to ready. And as I walked into our Critical Care Unit, newly repurposed, the first patient rolled on their bed over the new (old) children’s ward, Centennial.

Within 2 hours, Lilian, our clinical officer, had gotten every patient checked off and reassigned. A child who had just had heart surgery was admitted to the adult ICU with a pediatric ICU nurse reassigned in seconds. We had new beds for medical patients. New beds for surgical patients. Heaters in the rooms for our tiniest patients. We had mounted pumps, rearranged supplies, labeled new spaces, reworked old offices, carried benches and bedside cabinets..

Agnes, our nursing manager, ran back and forth, coordinating the many staff that were needed to make everything come together. I ran back to nursery to check on the babies, but the clinical officers and interns had everything well in hand.

And at 4 o’clock, when it was time to handover everything to the on-call team, we were a little discombobulated but ready. The space was new, but our patients were safe and the team was the same. A mom walked down the hall looking a little nervous. I gave her a COVID elbow tap, and said “Same people, just new surroundings.” She smiled and replied, “I know. . and thank you.”

We have had a few bumps this week, needed new poles for infusion pumps and new arrangements to some rooms.  We have had to reassign some mother’s beds in the middle of the night and change around the structure of the space a few times.

But most of my thoughts have centered around how grateful I am for this amazing team. For our fundis (carpenters) and biomedical team, for our clinical officers and consultants, for our nursing managers and nurses, for our patient assistants and clearnrs.

They have all made things work in the face of uncertainty. What could have been chaos has been absolutely smooth because we have come together.

The impossible is made possible yet again. God has placed each of us here for such a time as this.

Some day, I will stop being surprised. And for now, I am glad to be walking into this unknown with all of them by my side.

2 thoughts on “On Moving”