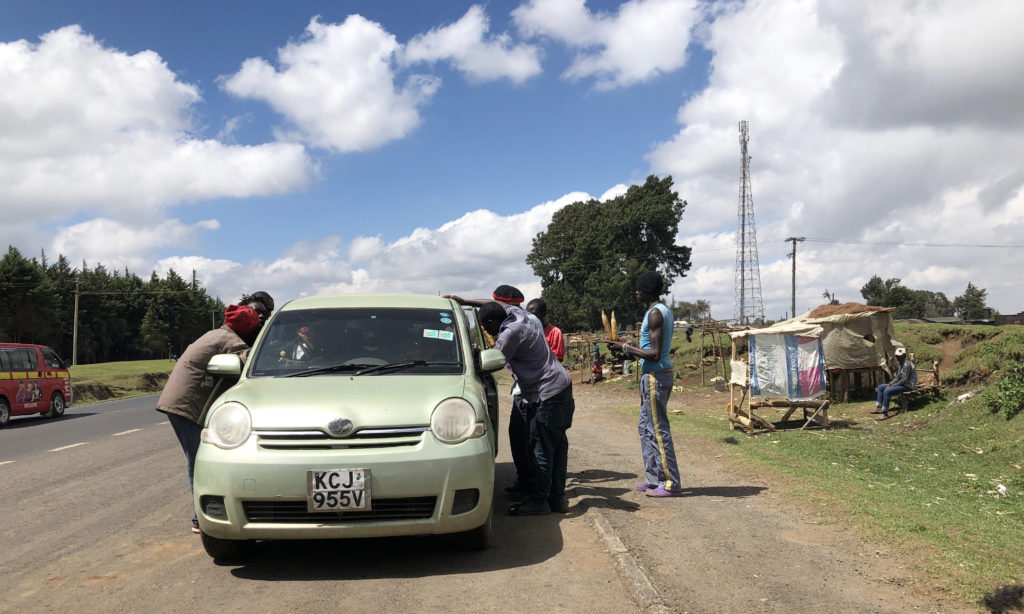 I walked Annabelle to school this morning, then made the usual rounds with Buddy for a little bit of extra exercise.

On the way back to the house, I saw two ladies struggling with their mother in a wheelchair on the rutted out road between our house and the Kijabe tarmac, next to the football pitch.

Struggling wasn’t exactly accurate, at that moment they had given up and were just staring at the wheelchair.

Southern hospitality kicked in, I tied Buddy to a tree, and offered to help. Thankfully our gardener, Chege, happened by at that time. Between the 4 of us pushing and pulling, we managed to get mom to the hospital.

In a Swahili conversation that was twisted, I asked if they would return to the guesthouse later in the evening. It sounded to me like they were planning to stay for some time until mom could receive surgery. I offered my phone number and asked them to call when they were finished, so I could drive them home.

Several hours later I received a string of phone calls to which communicated very ineffectively that I could not drive then to Nakuru (2 hours away) instead of the guesthouse (2 minutes away).

I found Chege to act as translator and drove to the hospital gate to load up the family, which was not the most straightforward process. Mom was paralyzed from the waist down and weighed close to 200 lbs. The wheelchair remained with the hospital, we found extra hands to lift her into the car and we drove up to the highway to look for a matatu or driver to take them the remainder of the journey.

Gichengo, pictured above, is not much of a town, but is a notoriously chaotic intersection, where Congolese singer Angela Chibalonza died a few years ago in an accident.

Part of the issue is the matatu stop, but adding to the chaos are the roast-corn (mahindi choma) sellers who attack every passing vehicle.

A story that has now become folklore, our friend Stephanie was rear-ended at Gichengo while waiting to turn into the road to Kijabe. The other car tried to escape. When Stephanie saw the crowd of people running to her, she thought momentarily they would try to help.

But then they shoved corn in her window, chanting “promote me, promote me,” as the driver who hit her sped away.

Stephanie did not, needless to say, purchase the roast corn.

Today, I had no money for mahindi choma and was in a bit of a hurry to get back down for lunch with the girls. So while the others waved for a matatu, I went to look for a private car.

Eventually I found a nice-looking driver with a private car, willing to take them to Kericho (twice the distance of Nakuru – almost 4 hours away!). We negotiated for quite some time on a price, they took about 20 selfies with me, we transferred mom from my car to the taxi (another challenging task) and they departed.

As I got in my car to pull away, a man with a handful of corn pounded on my window, “promote me, promote me!”

I laughed as I turned back toward Kijabe.

It is now late afternoon. One of the daughters called me a few minutes ago. They arrived home to another set of challenges. They have no wheelchair, an elderly, paralyzed mother. Precious few disability support systems exist in Kenya. Even a flat sidewalk or smooth road would be miraculous.

In Biblical times, they would have lowered her through a roof to Jesus for healing. After lifting mom twice today, I know that even this was not a small feat. I’ve never lifted a paralyzed adult before. It took four of us, just like in the story from Mark.

Sometimes it ends in miracles, but other times a little bit of compassion must be its own reward.